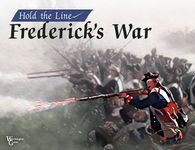 The Prussian army is well drilled and led by a bevy of talented generals, including Schwerin, Zieten, Leopold von Dessau, and of course Frederick the Great. The Austrian army is slightly weaker, but is aided by fearsome light infantry units and in later scenarios are led by such capable commanders as Daun and Loudon. As Prussia can you humble the Austrians and make your kingdom a first-class power? As Austria can you weather the Prussian storm and halt the first steps towards decline? The enemy approaches, the sound of cannon deafens, men shout commands, smoke fills the air. You must HOLD THE LINE!

For each scenario each player receives a number of command points to activate the units in his army for movement, close assault, and fire combat. Each side also receives a random number of command points for the same, but never knowing how many creating a battle field chaos that makes the game highly replayable. Scenarios take approximately 1 hour to play so you can get in multiple plays in an evening.
Entries over Time Chart (click to show/hide)
Share This Page on BGG
Paste the following BGG Formatted Link into any post (click box to select all, then copy to clipboard).

Game Entries by Month
May 2020
[BGG]
Aranubis
[WGOYT]
Entries for the month: 1