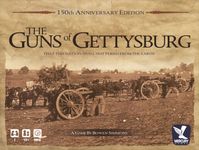 The Guns of Gettysburg (2013)
Subdomain: Wargames
Player Count: 2 - 4
Playing Time: 180 minutes
View Game Meta Data
View Game Ratings
Visit the BGG Page
Game Description (click to show/hide)
The Guns of Gettysburg is a simulation of the largest battle of the American Civil War. Like Bowen Simmons's previous games, Bonaparte at Marengo and Napoleon's Triumph, The Guns of Gettysburg uses a diceless and cardless system for governing movement and resolving combat. Units in the game are represented by linear blocks rather than the traditional hex and counters, giving the game an appearance that evokes 19th-century battlemaps.

The Guns of Gettysburg has simple rules and fast play but still reflects the historical limitations of the actual conflict. Though it preserves the aesthetics and "fog of war" mechanisms of Bonaparte at Marengo and Napoleon's Triumph, The Guns of Gettysburg is neither a sequel nor a successor to either game but a wholly new system of its own.
Entries over Time Chart (click to show/hide)
Share This Page on BGG
Paste the following BGG Formatted Link into any post (click box to select all, then copy to clipboard).