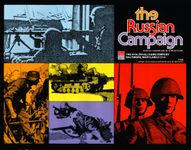 On the 22nd of June, 1941, Barbarossa was finally launched. Over three million German soldiers, most of them veterans of the campaigns in Poland, France, and the Balkans, began a blitzkrieg style of invasion against two million Russian defenders. The initial advance was fantastic. Hundreds of thousands of prisoners were taken and the motorized divisions began to outrun the rest of the army. The Germans reached the gates of Moscow, victory in sight. Then the winter came.

RUSSIAN CAMPAIGN has been universally acclaimed as one of the finest wargames around. With the ease and playability of the 'Classics', the game also conveys the feel of the actual campaign and is exceptionally accurate historically. Both players will have to use the subtle skills, advantages, and tactics of their historical counterparts to win.

The inspiration to Russia Besieged.

The fourth (and fifth) editions of this game have a different game entry, as does the Designer Signature edition. https://boardgamegeek.com/boardgame/10156/russian-campaign-f...https://boardgamegeek.com/boardgame/208974/russian-campaign-...
Entries over Time Chart (click to show/hide)
Share This Page on BGG
Paste the following BGG Formatted Link into any post (click box to select all, then copy to clipboard).