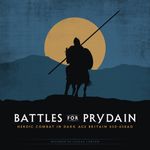 Scenarios are designed for two players, but a lack of hidden information makes the game highly suitable for solitaire play.

It’s Saxon versus Briton, Scot versus Northumbrian, and Penda of Mercia against everybody!

—description from the publisher
Entries over Time Chart (click to show/hide)
Share This Page on BGG
Paste the following BGG Formatted Link into any post (click box to select all, then copy to clipboard).