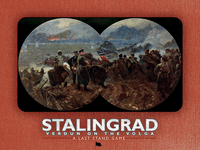 Stalingrad: Verdun on the Volga (2017)
Subdomain: Wargames
Player Count: 2 - 2
Playing Time: 180 minutes
View Game Meta Data
View Game Ratings
Visit the BGG Page
Game Description (click to show/hide)
A regimental-scale game of the two-month struggle for control of the 30-kilometer long industrial town that sat on the west bank of the Volga River. Stalingrad: Verdun on the Volga is divided into several two-player scenarios (based on the historical German offensives in September and October). The game enables you to re-fight one of the most important battles of World War II in a single evening (a victory point check at the mid-way point that can keep games under three hours) using Rinella's favorite area impulse game system.

- Turns represent four days of historical time.- The unit scale is roughly regimental, with some battalion-sized formations, versus battalion scale with some company-sized formations.- Only three units types - infantry, armor, and pioneer.- An accurate modeling of German combat attrition. Based on most recent publications utilizing post-Cold War Soviet sources (primarily Glantz).
Entries over Time Chart (click to show/hide)
Share This Page on BGG
Paste the following BGG Formatted Link into any post (click box to select all, then copy to clipboard).