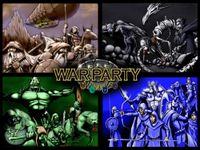 Warparty (2013)
Subdomain: Strategy Games
Player Count: 2 - 4
Playing Time: 150 minutes
View Game Meta Data
View Game Ratings
Visit the BGG Page
Game Description (click to show/hide)
In Warparty, players take command of the heroes and armies in a fantasy world beset by conflict. An alliance of Dwarves and Men are pitted in a battle of survival against the evil hordes of Goblins and the nefarious Undead. To win, players recruit massive armies, build cities, develop technology, and conquer territory in an effort to defeat their opponents by ultimately capturing their homeland. Beyond the mere battling of armies and world conquest, players direct the development of heroes to explore dungeons, battle fierce creatures, and gain valuable treasure and spells that can be used to turn the tides of war against their foes.

Movement Phase: An army can move all of their units during this phase.

Combat Phase: An army engages in all battles and resolves all dungeons on this phase.

Collection & Placement Phase: An army marks all new territories they have conquered with their control markers, adjusts their new income level. An army spends their money on new units, develops or researches the ability to acquire new units, builds new cities and/or upgrades their capital city.

To win players must either destroy an enemy capital city or achieve an economic victory.
Entries over Time Chart (click to show/hide)
Share This Page on BGG
Paste the following BGG Formatted Link into any post (click box to select all, then copy to clipboard).