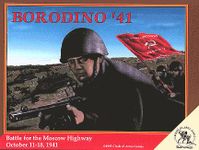 Borodino '41 (1995)
Subdomain: Wargames
Player Count: 2 - 2
Playing Time: 300 minutes
View Game Meta Data
View Game Ratings
Visit the BGG Page
Game Description (click to show/hide)
Borodino '41: Battle for the Moscow Highway October 11-18, 1941, is a simulation game depicting the little known but crucial battle for the Moscow Highway that took place near and on the old Napoleonic battlefield of Borodino, October 11-18, 1941. The motorized division SS Das Reich and the 10th Panzer Division were ordered to detach themselves from the outer encirclement line around the forces of the Soviet Western Reserve Fronts and head for Dorochova. That would halfway to Moscow. Resistance was not expected to be significant. But already rushing in to block them were all the forces that Stavka could scrape together. Several tank brigades rolled out of Moscow to slow the German advance. Cadet schools marched off to throw themselves in the way of the oncoming panzers while from far across Siberia, trains rushed at full steam, all other traffic shunted out of their way, bearing Stavka's ace card, the veteran 32nd Rifle Division from Vladivostok. Despite subsequent German claims that only mud preserved Moscow from their iron clutches, an examination of the fight for the one all-weather road from Warsaw to Moscow shows a much clearer picture of what really happened. Here is a clash of titans, two crack German divisions facing one of the best rifle divisions in the Soviet Army. If your experience from other wargames would lead you to believe tat the panzers will romp, you, like the Germans at Borodino, are in for a big eye-opening experience.

Based on the award winning Black Sea Black Death game system, Borodino '41 uses a map scale of 800 meters (one half mile) per hex, three or four impulses per daily turn, with infantry battalions and tanks and anti-tank guns by company (battery).

The units are played mostly face down, with dummies, to recreate the Fog of War. Combat involves fire, and assault, which are influenced by troop morale, terrain effects, armor support, engineers, and various other specialized units.

Included are some of the best troops of both sides, as well as Soviet reserve infantry, and tanks ranging from Pzkpfw IIIs and IVs, BT-7s, T-26s, T-34s, a few KV-1s, amphibious T-38s-even a T-28 Co without engines!

The game uses an updated version of the Black Sea Black Death system, with relatively little chrome and a high level of excitement. The impulse based game system keeps both players actively involved. Localized swings in initiative are common, and the situation presents many counterattack options for the Soviet player, even though he is on the operational defensive.

Players: 1 or morePlaying Time: 2-20 hoursComplexity: MediumSolitaire Suitability: Moderate
Entries over Time Chart (click to show/hide)
Share This Page on BGG
Paste the following BGG Formatted Link into any post (click box to select all, then copy to clipboard).