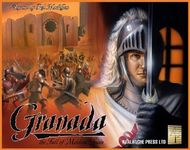 For over 700 years, Spanish Christians tried to exterminate the Arab kingdoms of southern Spain. This great "Reconquista" fired the crusading zeal of countless generations. The Arabs, or Moors as the Spanish knew them, saw the Spaniards as backward barbarians and fought ferociously to protect their sophisticated civilization. Finally, in 1482 King Ferdinand of Aragon embarked on the last campaign, to take the fabled city of Granada from its Islamic rulers.

This quick-playing, physically beautiful game re-creates the final 10-year struggle for Granada. Players take command of the Christian and Moslem holy warriors. God is on your side. Will you prevail?

Granada is a two-player game based on the 1481-1492 campaign between Ferdinand and Isabella of Aragon and Castille on one side (the "Spanish player") and Muhammed XII and later Muhammed XIII on the other (the "Moorish player"). The game's designer is Robert G. Markham, known for Soldier Kings: The Seven Years War Worldwide and dozens of other game designs.

The game is not overly complex. The game board (mounted, 22x17 inches) shows southern Spain including the Kingdom of Granada and surrounding areas. A network of key points is laid over this map, with castles, ports and unfortified areas connected by roads. Troops move along these roads from point to point. The object of the game for the Spanish player is to conquer the Moorish kingdom - Granada herself and five other important Moorish sites. The Moorish player seeks to prevent this, or to force peace on the Spaniards by taking their key cities of Cordoba and Lorca.

Each player has troops with which to carry out these tasks - knights, cavalry, and foot soldiers plus warships. The Spanish player also has siege cannon. Both players have leaders to move their troops and assist them in battle, with Ferdinand for the Spaniards and Muhammed al-Zagal for the Moors being much better at this than other leaders.

In battle, both players place their units on a combat display and roll dice to determine how many "hits" are achieved. Four hits will eliminate most units. The best units in the game are the Moorish Jund armored cavalry and the fanatic Spanish Knights of Santiago and Calatrava. A well-manned castle is very difficult to capture, but the Spanish siege guns can make an enormous difference. At sea, the Spanish player is trying to deny the Moor reinforcements from Africa. Many Moorish troops are volunteers from overseas, who must arrive at ports. The Moor can also gain aid from the Ottoman Empire, but only if he or she has kept the ports open.
Entries over Time Chart (click to show/hide)
Share This Page on BGG
Paste the following BGG Formatted Link into any post (click box to select all, then copy to clipboard).