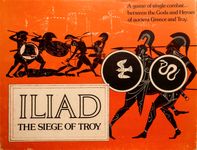 Iliad: The Siege of Troy (1978)
Subdomain: Wargames
Player Count: 2 - 2
Playing Time: 180 minutes
View Game Meta Data
View Game Ratings
Visit the BGG Page
Game Description (click to show/hide)
From the box:"A game of single combat...between the Gods and Heroes of ancient Greece and Troy. To the mundane scholars of academe, the Trojan War was fought for control of the ancient Black Sea trade routes. To the Romantic, it was fought over Helen of Troy, 'the face that launched a thousand ships and burned the topless towers of Ilium.' Whatever the cause, romantic or commercial, the war raged ten long years and involved the greatest warriors of that ancient age. Behind them stood the Olympian gods who, although forbidden by Zeus from intervening decisively, nevertheless gave what help they could to the side they favored. The Iliad is a fast-moving game of the entire ten-year war which has formed the basis for Homer's epic Iliad. Features include -

Every important Greek and Trojan hero is individually represented Heroes face each other in single combat as they vie for superiority Olympian gods may receive appeals and aid their chosen heroes Special rules cover the quarrel between Agamemnon and Achilles: if the quarrel is set aside, Achilles joins the battle, much to the dismay of the Trojans."

Reviewed by Tony Bath in Slingshot 86/28.
Entries over Time Chart (click to show/hide)
Share This Page on BGG
Paste the following BGG Formatted Link into any post (click box to select all, then copy to clipboard).