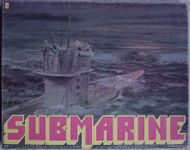 Submarine (1976)
Subdomain: Wargames
Player Count: 1 - 6
Playing Time: 180 minutes
View Game Meta Data
View Game Ratings
Visit the BGG Page
Game Description (click to show/hide)
Submarine is a tactical wargame of World War II submarine warfare. One player assumes the role of a submarine captain, while others are escort and/or convoy commanders. The submarine location is kept secret with the submarine player using plotted movement for the submarine and any torpedoes. The escort/convoy players move their ships on the board. When sighted or picked up by Sonar/Asdic the submarine will then be placed in full view on the map board as well. The game includes rules for different nationalities, various anti-submarine warfare systems, historical scenarios, night-fighting, and Design Your Own scenarios etc.