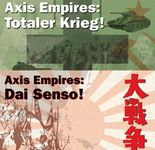 Second, there’s Schiffskrieg, the air-and-naval expansion that provides additional detail for players who want more from the game beyond its abstract support units. Now players must base their air assets and ships (down to the cruiser level) on the map and move them to respond to threats. Air-naval combat, commerce raiding, anti-submarine warfare and naval construction are all accounted for while preserving that Krieg design elegance you know and love.

Third, there’s Dice of Decision II, a much-expanded update to the Random Campaign Generator featured in Totaler Krieg! As before, you’ll be able to create new, very different Second World Wars based on alt-history paths from the Great War and the 1920s and ‘30s: What if the Tsar still ruled Russia? What if Germany had won the war in 1917? What if there hadn’t been a Great Depression? New for DoD II is everything related to Asia and the Pacific—now you’ll be able to explore alternate Pacific Wars: What if there were no Washington Naval Treaty? What if Japan’s 1931 involvement in Manchuria had unfolded differently? What if Gandhi had gained independence for India? Naturally, your alt-hist Europe and Pacific games will still link to tell a completely original Global War story.

—description from the publisher
Entries over Time Chart (click to show/hide)
Share This Page on BGG
Paste the following BGG Formatted Link into any post (click box to select all, then copy to clipboard).