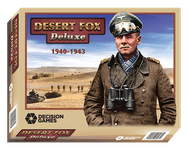 Desert Fox Deluxe (2016)
Subdomain: Wargames
Player Count: 2 - 2
Playing Time: 2880 minutes
View Game Meta Data
View Game Ratings
Visit the BGG Page
Game Description (click to show/hide)
Desert Fox Deluxe is a combination of two previously published games covering parts of the North African campaign–Desert Fox and Trail of the Fox–expanded with additional rules, units, and maps to cover the entire war in the North African desert from the Italian invasion of Egypt in 1940 to the final Allied clearance of Africa in 1943. The map scale is 10 miles per hex, turns cover one month each, while units are mostly regiments and brigades, with specialist battalions and a few Italian and Vichy French divisions. The turn sequence is built around a pair of move-fight impulses for each player, with separate phases for events altering the situation (like the frequent Commonwealth campaigns elsewhere in the Middle East), application of air and naval power, and initiative determination. Logistics is the paramount consideration given the vast distances. Fast and furious action alternates with quiet periods as both sides strive to build up forces and supplies.

Boxed edition in 2019 added cards to better depict the impact of off map events (like Greece, and East Africa) on reinforcement and withdrawals. 20 cards for the Axis and 28 cards for the Allies. Also adds a Support Booklet, and a Campaign Analysis Booklet.
Entries over Time Chart (click to show/hide)
Share This Page on BGG
Paste the following BGG Formatted Link into any post (click box to select all, then copy to clipboard).