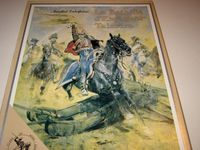 La Bataille d'Espagnol: Talavera (1979)
Subdomain: Wargames
Player Count: 1 - 3
Playing Time: 2400 minutes
View Game Meta Data
View Game Ratings
Visit the BGG Page
Game Description (click to show/hide)
La Bataille d'Espagnol-Talavera is a simulation of the culminating battle of Wellsley's 1809 counter-offensive. The radically different English and Spanish armies are pitted against the corps of King Joseph Napoleon's multi-national Armee de Espagne.Played on four 17"x22" period style maps over which a hexagonal grid has been laid. Each hexagon represents an area approximately 100 meters across. The armies which fought on this ground are represented by over 700 multi-colored playing pieces. Infantry are in regimental or battalion organization. Cavalry are shown as regiments. Artillery is deployed by battery. Distinctions are made between line or light infantry, guard and other elite forces. Various leaders are also portrayed.Each unit is individually rated according to its number of men or guns, its morale, its ability to initiate combat though gunfire or mêlée, its movement and, where appropriate, its range.The game is ideal for solitary study or team play. Each turn is twenty minutes of real and simulated time, play balance depends entirely on the skill of the players.The rules are a revision of the award-winning system developed by the Marshal Enterprises Household and cover the full range of features characteristic of the Napoleonic Battlefield. A special rulebook provides regulations particular to the Spanish Campaign of 1809, and a historical narrative completes the perspective of events on July 27-28 of that year.